We have been waiting for it for several years and France has finally transposed the European Directive 2015/2436 of 16 December 2015, approximating the laws of the Member States on trademarks by the Pacte Law.

One of the major changes in French law concerns the reform of the opposition procedure before the INPI against a trademark application infringing the prior rights of a third party. This new-generation opposition applies only to French trademarks, or international trademarks designating France, filed on or after December 11, 2019. For trademarks filed before this date, the old procedure remains applicable.

We therefore offer you a comparison between the new and the old opposition proceedings.

The old opposition was characterized by the obligation to invoke only one prior right per procedure. Thus, if a holder wished to base his opposition on two trademarks, he had no choice but to file two oppositions. 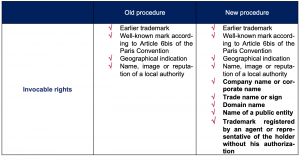 The official tax has changed and is now of €400 for the fist prior right invoked and of €150 for any additional rights invoked.

Course of the procedure

If the deadline to file an opposition is still of two months from the publication of the contested trademark, it is now possible to file a formal opposition. The brief setting out the arguments in support of the action must be submitted within 1 month of the expiry of the opposition period.

The adversarial principle has also been strengthened since the parties can exchange several sets of written submissions in order to make their case. In return, the opposition procedure is lengthened and can last up to 10 months before the final decision is taken, as opposed to a maximum of 6 months under the old procedure.

As part of his defense, the applicant of the contested mark may require the opponent to provide proof of genuine use of the earlier marks invoked which have been registered for more than 5 years. Such a possibility was already available in the old opposition proceedings.

However, the INPI now has the power to exercise a thorough control of the evidence to be provided by the opponent. It will therefore be necessary for the latter to be in a position, prior to the initiation of opposition proceedings on the basis of a trademark registered for more than 5 years, to provide proof of genuine use of the trademark for all the goods and/or services invoked in the context of the proceedings.

The new generation opposition procedure is therefore a major step forward for holders of prior rights by providing them with a broader basis for action and a strengthened adversarial principle. The other side of the coin is the need to demonstrate the genuine use of its trademarks registered for more than 5 years, at the request of the defendant, for all the goods and/or services invoked in support of the opposition.