Under the impulsion of the European Union’s (EU) legislation, French trademark law has recently undergone a fundamental change, aimed at harmonizing the different national legislations of the Member States. One of the main effects of the adoption of the government decree No. 2019-1169 of November 13, 2019 is that, since April 1st, 2020, cancellation proceedings of French trademarks or of French designations of International Registrations have been considerably simplified and made much cheaper.

These proceedings are invalidity actions based on relative grounds, including for violation of earlier rights (the owner of earlier rights considers being the first to “occupy the ground”), or on absolute grounds (the trademark is invalid per se because it is descriptive or contrary to the public order) and revocation actions, including when the owner does not genuinely use its trademark or when the latter has become a common name in the trade for a product or service for which it was registered (for example, the trademark “Escalator” for mechanical stairways):

Whereas before the reform judicial courts had exclusive jurisdiction over these actions resulting in the application of dispositions of the Code of Civil Procedure and the obligation to be represented by a lawyer, this competence is from now on shared with the National Institute of Industrial Property (INPI).

The purpose of this article is to present the new rules and the advantages of this reform.

1/ Where does it take place now, and what new can be done?

The reform transferred jurisdiction from the judicial courts to the INPI and the interest to act is not required anymore for some actions, thus increasing the possibilities of obtaining the removal of a trademark from the registers. At the same time, the reform provides new possibilities for the owner of the challenged trademark to defend itself against the applicant of the invalidity action.

Revocation actions for non-use, which allow to obtain the cancellation from the registers of a trademark registered but not used by its owner, now have to be brought directly before the INPI, whereas previously the action could only be brought before one of the ten courts having jurisdiction corresponding to the domicile of the trademark owner.

The same applies to invalidity actions based on relative or absolute grounds.

The table below summarizes the new jurisdiction rules and those kept unchanged: 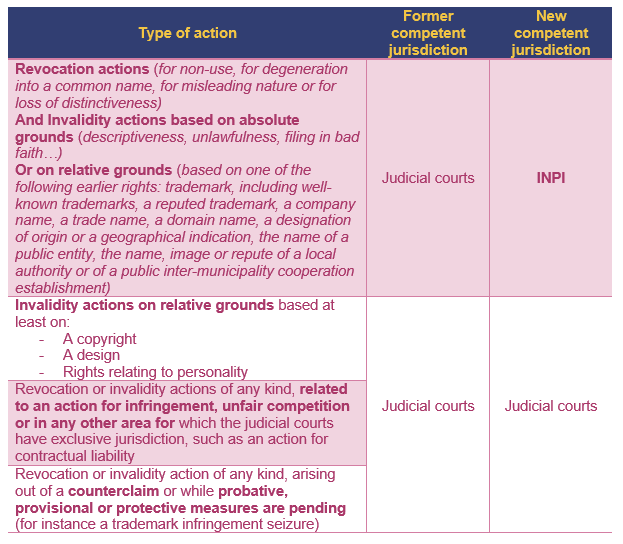 These new rules of jurisdiction may give rise to litigation strategies and choices of appropriateness: if the jurisdiction of judicial courts is sought, it may be obtained by adding in the writ of summons claims relating to infringement, or by adding to the basis of the earlier trademark an earlier copyright: in this case, the court’s jurisdiction wins over the INPI’s jurisdiction.

Conversely, to save money, a party could, if it considers that it is in its interest, waive its infringement claims and simply request the cancellation of a trademark directly before the INPI, thus saving itself procedural costs that are higher before judicial courts.

Litigation strategies will also be influenced by the fact that principal claims for revocation, passing from the judicial courts to the INPI, are no longer subject to an interest to act. The applicant who wants to obtain the revocation of a trademark that it considers not used by its owner will no longer have to prove, for instance, that it has an earlier right to an identical or similar sign and for identical or similar goods to those for which it is seeking revocation.

With the exception of actions based on absolute grounds and actions for revocation, all other actions and claims, whether brought before the INPI or before a judge, involve the demonstration of an interest in bringing proceedings, including the counterclaim for revocation, i.e. the reply made by a defendant to the owner of a trademark who acts in infringement proceedings before a court:

In other words, a party wishing to obtain the cancellation of a trademark will now be able to apply for it before the INPI without being the owner of any earlier right and will be able to target the total cancellation of the trademark even when it owns an earlier mark for only a few goods or services also designated by the contested trademark.

In defense, the owner of the contested trademark may raise several defenses:

It may first challenge the applicant’s interest to act, when such interest is required.

It may then raise the time-limitation (but only if an earlier well-known trademark is invoked) or the foreclosure by acquiescence for invalidity actions based on earlier rights.

It may also request that the action be declared inadmissible:

Such inadmissibility is not automatic but must be raised in defense by the owner of the contested trademark.

In such a case then, the applicant may be compelled to prove use of its earlier trademark during two different, sometimes overlapping or merging, reference periods. 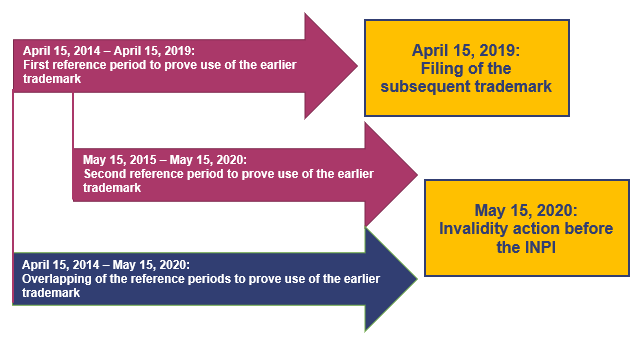 All of these defenses will be addressed by the INPI in its final decision.

2/ How does it work and for how long can these proceedings last?

The procedural rules governing new actions brought before the INPI are not the same as the ones applicable before the judicial courts. They should allow a faster treatment of the proceedings.

Invalidity or revocation action before the INPI are initiated by the filing of an online form identifying:

The applicant must also attach proof of payment of the official fee of 600 euros (this amount does not include the attorney’s fees) to which may be added 150 euros for each additional prior right invoked in an invalidity action based on relative grounds. No new right may be invoked after the action has been filed, it is therefore necessary to think carefully from the outset about all the rights that may be invoked. However, it is possible to withdraw some of these rights as well as some of the goods and services covered by the application for cancellation, throughout the proceedings.

In any case, apart from the revocation action for non-use, for which it is not mandatory, the applicant shall also attach observations setting out the grounds for cancellation of all or part of the trademark (specifying, for instance, how the earlier trademark is similar or identical, as regards its sign and its goods and services, to the subsequent trademark).

Finally, the action before the INPI can only be either an invalidity action or a revocation action. It is impossible to cumulate the grounds within a single action, whereas it was possible until recently before the judicial courts, with litigants requesting invalidity based on earlier rights and revocation for non-use, for example, and not necessarily one in the alternative to the other, without this constituting a cause of inadmissibility.

Therefore, this change encourages applicants to better define their strategies upstream, even if the reform does not prevent them from bringing two parallel actions on two different grounds, which is even more encouraged by the fact that the cost of these actions is very limited.

Once the application has been filed, the INPI has one month to examine the admissibility of the action and to notify the owner of the challenged trademark, which triggers a series of time limits: a first two-month deadline for the owner to submit its first observations in reply, followed by several one-month time periods allowing the parties to exchange written observations and supporting documents, if they wish to: two sets of observations for the applicant and three for the owner; with the last observations not being able to raise any new ground or attach any new proof of use.

If one of the parties decides not or no longer to make use of its right to submit observations, the adversarial phase can be concluded quickly – with the proviso that the owner of a trademark for which revocation for non-use is sought will still be allowed to submit two sets of observations and proofs of use, even in the absence of a response from the applicant.

At any time, each of the parties, or the INPI itself, may request an oral hearing, which will take place at the end of the adversarial phase.

Finally, the parties may suspend the proceedings at any time, by mutual agreement, for three time periods of four months.

The INPI has three months to render its decision following the end of the adversarial phase. In case the INPI does not meet the deadline, the action is deemed rejected.

The proceedings before the INPI can then theoretically last between six months and a year, if no suspension is requested.

The decision may charge the losing party with part or all the costs of the proceedings, at the request of the winning party, but only if the action is totally won or lost: the costs are at each party’s expense if, for example, the decision cancels only part of the goods and services targeted by the applicant.

If no appeal is filed, the decision rendered by the INPI is enforceable. If the trademark is cancelled because of the applicant’s prior right, the cancellation is retroactive and takes effect on the date of filing of the cancelled mark: it shall be deemed to have never existed.

Retroactive cancellation has an effect on third parties (an “erga omnes” effect): for example, if an infringement action was initiated earlier by the owner of the cancelled trademark against a third party, this action may become moot.

Once the decision has been rendered, the parties have one month (excluding extended deadlines for DROM-COMs and for foreign residents) to bring an appeal before the one of the ten specialized courts of appeal that is territorially competent, that is to say the one of the domicile of the party bringing the appeal (or before the Paris court of appeal for the appellants residing abroad). Legal representation is mandatory.

The appeal proceeding in itself follows the usual time limits, and it should be possible to reach a final decision approximately one year after the case has been referred to the court. The appeal proceeding will therefore take longer than the procedure before the INPI.

A writ of certiorari against the appeal decision can of course be filed before the French Supreme Court (Cour de Cassation), even by the INPI.

In the event that a trademark has been validated following a cancellation action, this trademark does not, for all that, become indisputable.

The rule is as follows: when a cancellation action is brought 1° between the same parties having the same quality, 2° with the same object and cause of action and 3° when a final decision has already been rendered either by the INPI or by a judicial court, then the action is inadmissible (“res judicata” principle).

Similarly, a revocation action which has given rise to a decision to maintain the contested trademark does not preclude the bringing of a new revocation action at a later date, since the reference period during which the owner must have used the mark will not be the same and it remains possible to revoke the rights of an owner that has, in the past, used its mark but is no longer using it.

Many other complex situations may arise and create difficulties in the context of these new actions.

To summarize, here are the advantages of these new actions, available since April 1st, 2020:

TAoMA Partners, Attorneys-at-law and Intellectual Property Attorneys, is at your disposal should you wish to find out more or take advantage of these new opportunities.